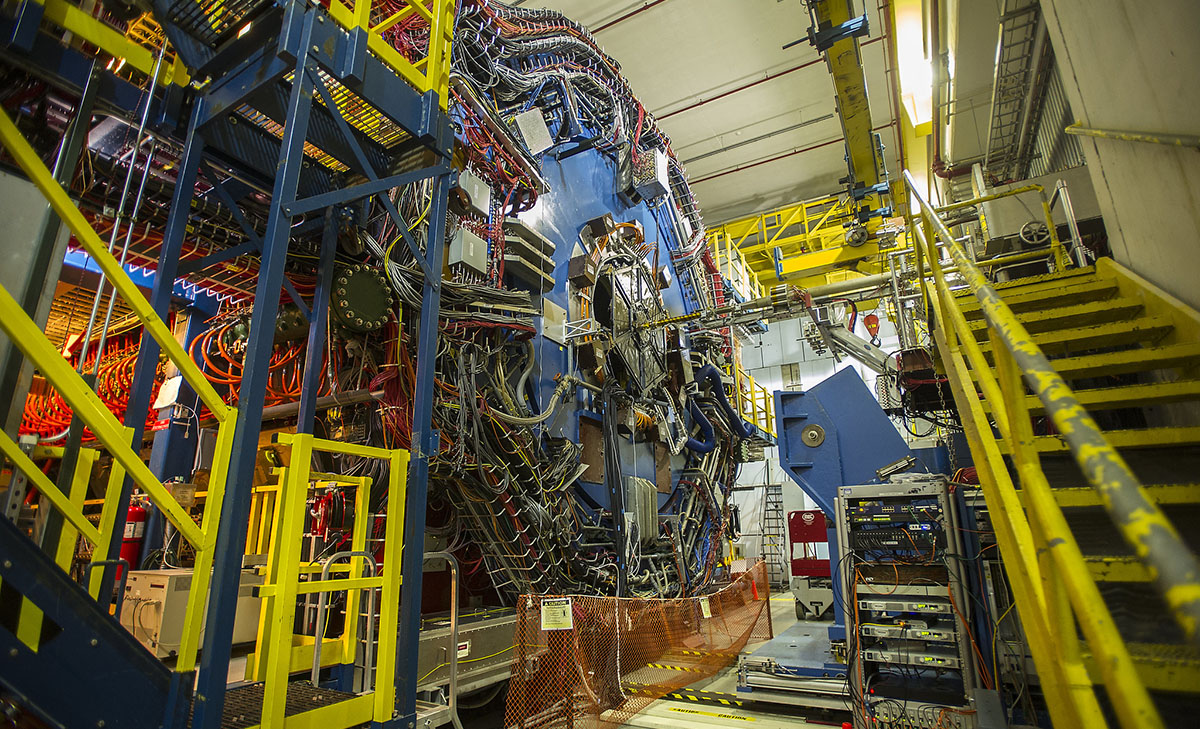 In the first few microseconds after the Big Bang, the universe consisted of a hot and dense state of matter called the quark-gluon plasma (QGP). This state of matter is essentially a "soup" of quarks and gluons, the subatomic particles that make up protons and neutrons, which in turn are the building blocks of atomic nuclei. Scientists at modern collider facilities accelerate nuclei to very high energies and smash them into each other, which “melts” them into their constituent quarks and gluons and recreates the QGP. These ion collisions are the focus of research by experimental nuclear physicist Anders Knospe.

Supported by a $750,000 grant from the Department of Energy Early Career Research Program, Knospe will measure the production of heavy quark-antiquark bound states in heavy-ion collisions to learn about the properties of the QGP, including the evolution of its temperature with time.

“This generous funding from the DOE will support my research on two experiments for the next five years,” says Knospe, assistant professor of physics. ”My graduate students, my postdoc, and I will be able to go to Brookhaven [National Laboratory] to work on the experiments and travel to conferences to talk about what we’ve learned. With support like this grant, Lehigh will continue to be a leader in the field of heavy-ion physics.”

Since the early 2000s, scientists at the Relativistic Heavy Ion Collider at Brookhaven National Laboratory have created QGP by smashing gold ions together at nearly the speed of light. These collisions can produce temperatures up to 4 trillion degrees — 250,000 times warmer than the sun’s interior and hot enough to melt protons and neutrons into quarks and gluons. Knospe’s research hopes to learn more about the properties of this plasma, which will improve our understanding of the force that holds nuclei together and the physics of the early universe. Physicists use a wide variety of probes to characterize the properties of the QGP in detail. Knospe will use heavy quarkonia, which are bound states of a charm quark with an anticharm quark or a bottom quark with an antibottom quark, as probes of QGP. The presence of this plasma will inhibit the formation of heavy quarkonia in a way that depends on both the temperature of the plasma and how tightly bound the quarkonium state is, he says.

Knospe’s work requires a very high-resolution detector. To do these experiments, he will use the particle identification and tracking capabilities of the STAR detector and the sPHENIX detector found at Brookhaven. Built some 20 years ago, the STAR detector is about the size of a two-story house and weighs 1,000 tons. sPHENIX is currently under construction and Knospe’s team will start collecting data with it in the next few months. Knospe and his colleagues will use these detectors to measure the production of charm-anticharm and bottom-antibottom quarkonia in proton-proton and heavy-ion collision systems to shed light on how the suppression of these bound states evolves with system size. Bound states with different energies have different radii, so it’s expected that loosely bound states will be screened more than tightly bound states. The strength of the screening effect also depends on the plasma’s temperature. So by measuring the relative suppression of different types of quarkonia, it is possible to characterize the temperature of the quark gluon plasma. Essentially, these heavy quark bound states can be used as a thermometer, he says.

“Heavy quark-antiquark pairs are  going to be less likely to form a bound state inside a QGP. If we measure how many times we see these bound states in these heavy ion collisions, ... and compare that to how often we see them in collisions where we don't expect quark gluon plasma, we can quantify how much the formation of these states was suppressed by the presence of the quark gluon plasma.”

The use of heavy, rare particles to probe the quark-gluon plasma will shed light on the behavior of this unique state of matter. The project’s goal is to learn more about the properties of this plasma, which will improve our understanding of the force that holds nuclei together and the physics of the early universe.

The Early Career Research Program supports the research of outstanding scientists early in their careers. The program supports early career researchers for five years at U.S. academic institutions, DOE national laboratories, and Office of Science user facilities. To be eligible for the program, a researcher must be an untenured, tenure-track assistant or associate professor at a U.S. academic institution or a full-time employee at a DOE national laboratory or Office of Science user facility.