On March 12, New York Governor Andrew Cuomo announced that due to COVID-19, all theatrical performances were canceled, effective immediately. For small off-off-Broadway companies like Flux Theatre Ensemble, engagements with audiences had to be reenvisioned. For scene designer and Flux Creative Partner Will Lowry, the shift in audience interactions presented new and interesting challenges.

The ensemble had been developing a new play for two years, but with the closing of theatres, it became clear to him and his partners alternatives were needed with the end of the physical production. Shortly thereafter, the ensemble offered select scenes online from the play with explanations from the artists about their creative process. 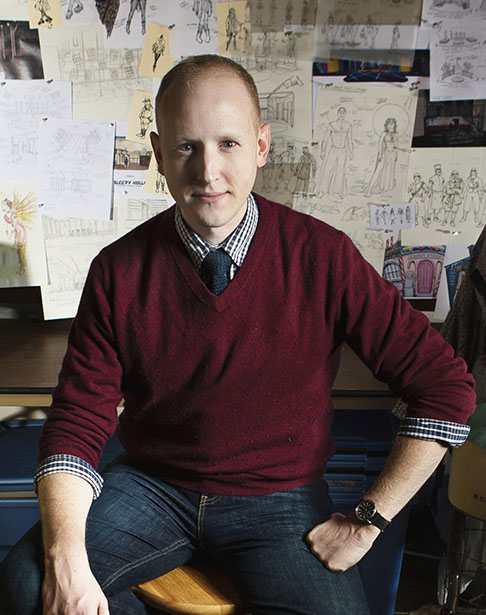 “We were trying to find something that felt like interaction when we couldn’t have live theatre,” says Lowry, assistant professor of theatre. “Many of us made this big discovery, largely due to the chat function with Zoom, though we were geographically distant, there was still this sense of shared space and of liveness. By doing the scenes this way, we had this sense we were sharing the space with the audience. We were engaging in live theatre even if we were living in separate locations.”

From these online engagements, Lowry notes the ensemble uncovered a connection between live theatre and digital media, fostering an idea to create an old-fashioned hotline with a phone tree.

Still in the early planning stages, Lowry and his colleagues are developing scripts with an underlying concept that people can leave something on the tree or take something as the script develops. While the hotline is not truly live as participants will not speak to a live operator, there can be dynamic qualities to it where it evolves over time, he says.

Also envisioned are prompts to promote interconnectivity. If one wants to leave a message for a loved one, a recording can be left on the hotline, he adds. The message will not be delivered to the loved one, but participants can lend their voice to the experience.

“If you want to just scream into the void, that’s fine. It’s about having the outlet available to do so,” he says.

While some aspects of the hotline might be purely meditative, there also might be moments where callers receive triggers to take specific actions.

“You might call in and get a prompt that says, ‘We’ve been trying to reach you. Please press three,’ and then there are opportunities to follow a pathway and engage with someone on the hotline, leaving virtual breadcrumbs for you to follow and piece together. “

Lowry says they are trying to develop a virtual world, akin to table games like Dungeons and Dragons, where participants interact with virtual characters, propelled forward by following an underlying story. Participants can call in one week to follow the story, but the story will change by the following week because other participants have been shaping the story’s direction.

Flux Theatre Ensemble produces transformative theatre that explores and awakens the capacity for change. As an ensemble-artist driven company, they believe that long-term collaboration and rigorous creative development can unite artists and audiences to build a creative home in New York.