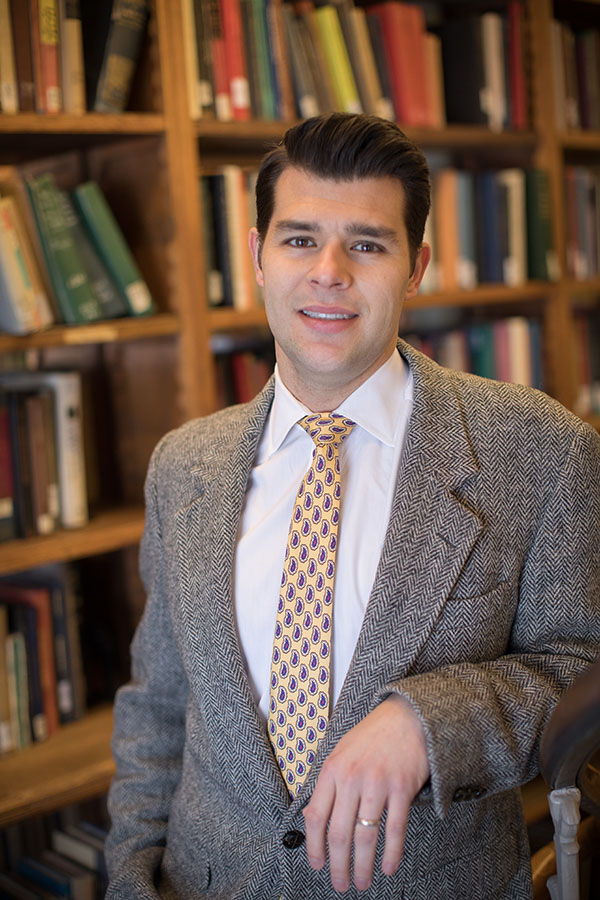 Medicine is commonly understood through the metaphor of war, as in “the war on cancer” or “the battle against Ebola.” This military metaphor is so embedded in the dialogues of medicine that we do not think twice about using this structure or about its bioethical implications, much less its origins, says Lorenzo Servitje.
In his forthcoming book, Medicine Is War: The Martial Metaphor in Victorian Literature and Culture, Servitje reveals how the notion of the body against disease as a fighting action gained cultural traction throughout the 19th century to become the figure of speech often heard today. The book traces the metaphor’s history, revealing how literature obstructed the military history of medical language and circulated the resulting metaphor in the public imaginary. But the thought of medicine as war didn’t begin as a metaphor, he says.
“It’s not just the science that makes this happen,” says Servitje, assistant professor of English. “The metaphor came out of military medicine, specifically the military encountering epidemics and infectious disease. Military doctors come in contact with disease, which translates into the public as civilian doctors start talking about the immune system as defense, medicine as defense in a war. Victorian authors translated military medicine into medicine as war metaphorically.”
These connections were reflected on and used as a symbol by such authors as Mary Shelley, Arthur Conan Doyle, Charles Kingsley, Bram Stoker and Joseph Conrad at the start of modern medicine to become codified in everyday usage. Shelley and Kingsley conflated the cholera epidemics of the first half of the 19th century with war in the context of pre-bacteriological theories of disease, says Servitje. The writings of Stoker, Conan Doyle and Conrad drew connections between empire, race and germ theory in the second half of the 19th century as medicine began to understand disease as caused by living organisms challenged Britain’s racial identity.
“One of the larger implications is that in the late 19th century, medicine declared a war on microbes. This really kicked up in the 20th century with the development of antibiotics, most notably penicillin, in the 1940s,” Servitje says. “Because we had this ideology about medicine as war, this contributed significantly to the overuse of antibiotics from the beginning. Interestingly, we now metaphorically have the term post-antibiotic apocalypse.”
From the Greeks until about the 1800s, medicine was understood as a type of balance based on the four humors that were out of balance whenever one was ill. Things changed in the 1800s as science began to understand disease, contagions, whether our bodies transmit disease or whether environmental aspects can cause disease. Things changed again with the rise of germ theory in the late 19th century.
“Much of this investigation is driven by contemporary bioethical questions,” he says. “Doctors consider how they talk with their patients about cancer. Am I limiting other possibilities by phrasing it in a certain manner? That’s important, but nobody has examined how we got to this point. It’s hard to think about it outside the terms of war. It’s hard to think of the body working in a different way. We’re not fighting disease. The immune system doesn’t work on a military logic. When we come to understand the history, we can find alternatives and posit other metaphors.”

Philosophy Faculty Receive Grants from National Endowment for the Humanities