Skip to main content
“Sketchlehem” is a word commonly used by Lehigh students to describe  Bethlehem’ South Side community. It is a combination of the words “sketchy” and “Bethlehem”. There has consistently been turmoil between Lehigh students and the surrounding community. Journalism and Africana studies major Ashley Omoma '18 has dedicated her senior year to investigating this stigma. 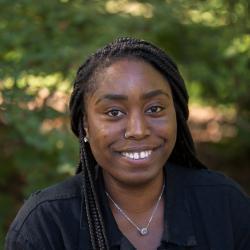 Omoma is in the process of producing a documentary film titled, “The Unmaking of Sketchlehem” which was funded but a Mellon Digital Humanities Initiative grant. The film strives to understand why the South Side is viewed as “sketchy” and where that rumor originated. The documentary covers the history of South Bethlehem and how the steel industry could have added to the decline of the South Side. Omoma walks the audience through time starting with the immigrants that came to South Bethlehem. As the steel industry fell, the wealth in the area left with it leaving behind a “rough” and undeveloped area.
The documentary then looks at modern day South Bethlehem and gets the prospective on this issue from several community members. Many citizens are worried they will lose their homes to the increasing prices in the area. As Lehigh University expands, it engulfs the South Side with it. Although the intention of the Lehigh community is to better the area, it is leaving behind many loyal residents.
“We are having such a huge impact on the community. When we talk about revitalization, it always sounds good. The community is getting better. But there is part of it that is pushing out a certain sector of the community that cannot live here due to the rising housing prices,” Omoma states.
Omoma hosted an event in Williams Hall to discuss this controversial topic. The event was part of her Global Citizenship capstone project. Omoma presented the issue followed by a question and answer a variety of activities in which community members and Lehigh students interacted.
Omoma hopes to address the issues about which the community members are concerned, about such as the rising cost of living.
Omoma works to uncover by what students mean when they call the South Side sketchy. “Are we talking about people? Class differences? Racial differences? Or even the look of the town?” Omoma said.
“It is an important issue because Lehigh students are huge players in this. I don’t think we see or think about it too often especially when we say stuff like, ‘the South Side is sketchy’, ” Omoma says.
Omoma wishes to continue her research on marginalized communities in the future. She feels that as a black woman she can relate to these communities and helps them find salvation. Additionally Omoma will continue her work as a documentarist and further her interests in multimedia.
“What I’m trying to do is amplify these voices,” Omoma said. “And for the community members to know they are heard and that Lehigh students know the impact of their actions”.
by Samantha Silverman '18