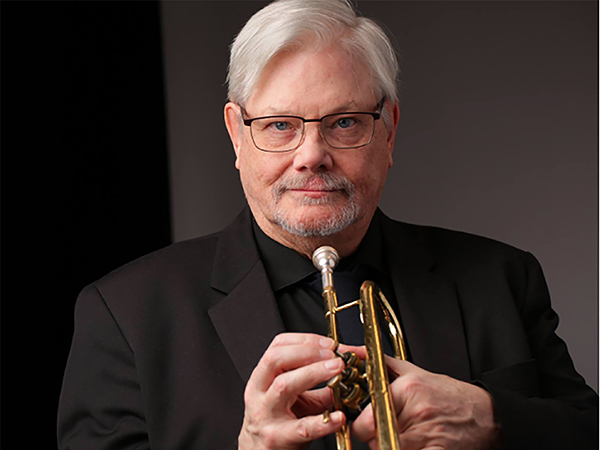 Bill Warfield’s latest album release, For Lew, is personal. Warfield, professor of music, released an anthology of works by his Bill Warfield Big Band from four album releases of 1990 to 2014; two tracks are previously unreleased. This collection of jazz is a tribute to one of New York City’s great session musicians and collaborators who passed away in 2015.

“Lew was my buddy and my trumpet teacher,” says Warfield, associate professor of music. “Lew is the guy who took all those trumpet solos in Blood, Sweat and Tears early albums. I stopped playing trumpet when I was young because I’d knocked my teeth out in a car accident, then I heard Lew’s solo on Spinnin’ Wheel. I decided I wanted to play the trumpet again. When I moved to New York, I’d go see him sometimes and when I went to the Manhattan School of Music I got to study with him for four years.  Lew meant a lot to me. We became friends and he began doing some of my record dates for me. He had a tremendous influence on me and got me to take my writing seriously.”

Warfied has been an active member of New York’s jazz scene since 1980. He has built a notable career as a composer, arranger, bandleader and educator. For Lew embodies a dozen selections, five written by Warfield and all but two previously issued on albums spanning the years 1990-2014. Soloff is featured on several selections.

Considered by many to be one of the great session musicians, Soloff worked with Blood, Sweat & Tears from 1968 until 1973. He also worked with Frank Sinatra, Gil Evans, Thad Jones/Mel Lewis and the Jazz Orchestra. Soloff’s career was filled with a rich history of renowned sessions and world-class collaborations. From the time he transitioned into the east coast world of trend setting musicians in the mid 1960s, Soloff’s creative projects resulted in a renowned body of work that places him in a category of musical greats.

In addition to his professional schedule, Warfield directs the Jazz program at Lehigh University, directs the New York Jazz Repertory Ensemble, The New York Jazz Octet and the Hell’s Kitchen Funk Orchestra. He appears regularly at Iridium, Dizzy’s Jazz Club in NYC, The Garage, Zinc Bar and many other clubs in the greater New York area. He frequently performs and teaches in Europe in addition to writing commissioned works for various conservatories and radio orchestra around the world.

His latest release has garnered positive reviews by the major jazz publications. There is a special connection to each track for him. “It’s the stuff I like best,” he says. “It wasn’t done to make money. It was done to give to my friends.”