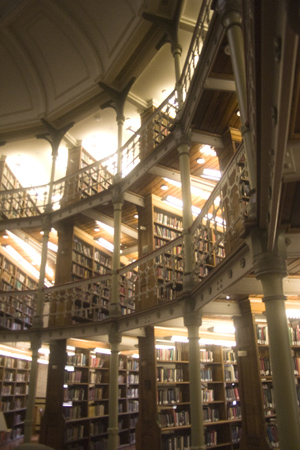 The Eckardt Scholars Program is a selective and unique honors program in the College of Arts and Sciences emphasizing interdisciplinary exploration as well as student choice and flexibility in designing an independent course of study. Students in the program are exempt from the Arts & Sciences distribution requirements and work with the director to create a course of study that best suits their academic interests and ambitions. The program includes a significant component of independent research in the form of a College Scholar Thesis requirement as a capstone event.

This highly selective program is restricted to a small number of especially qualified students, some of whom are enrolled at the time of admission to the university and the rest as first-semester sophomores. Entering first-year students may join the program at the invitation of the Eckardt Scholars Advisory Council. Applications from sophomores are evaluated by the Advisory Council on the basis of their academic records, written statements of educational goals, and recommendations from two faculty members.

In addition to the academic privileges of the program, Eckardt Scholars are offered a variety of extracurricular opportunities, including invitations to meet visiting speakers, informal meetings with faculty members, dinners, lectures, plays, musical events, and other cultural activities.

The program is named in honor of A. Roy Eckardt (1918-98). Having earned a B.A. at Brooklyn College, a master’s at Yale and a doctorate at Columbia, Roy came to Lehigh in 1951 and served as chairman of the Department of Religion from then until retiring in 1980. A prolific author of books and articles on moral philosophy and the theology of politics, Roy was one of the world’s leading authorities on the Holocaust and relations between Christians and Jews. As an administrator, editor, and writer, he had an enormous impact on the study of religion both at Lehigh and throughout the United States.

A New Face for a Southside Icon