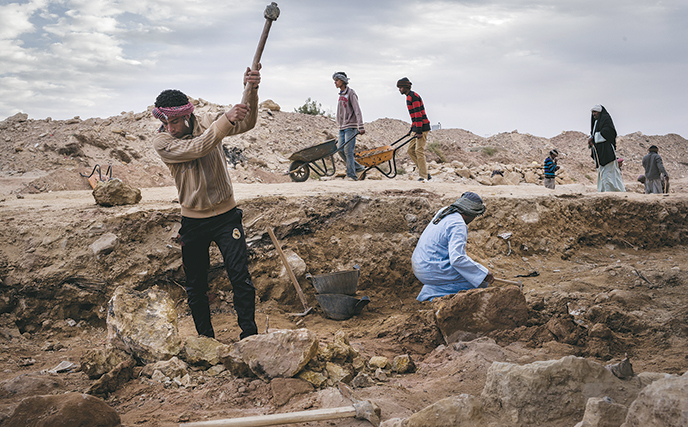 Archaeologist Allison Mickel documents and advocates for local workers at archaeological sites to finally be recognized for their expertise.

Throughout history, Western archaeologists have hired local residents to perform the manual labor of excavation while excluding them from any of the documentation, analysis, or publication of the results. Assistant professor of anthropology Allison Mickel, a proponent of “community archaeology” that looks for ways to do better by the communities in which archaeologists work, wants to change that long standing practice.

Mickel recently received a National Endowment for the Humanities (NEH) fellowship to complete her current book project, tentatively titled Turning Over the Spade: Startup Approaches to Transforming Archaeological Labor, which documents her research and experiences on the topic at excavation sites in Petra, Jordan, and and Catalhoyuk, Turkey.

Mickel’s current book is somewhat of a sequel to her previous book, Why Those Who Shovel Are Silent: The Unknown Experts of Archaeology, where she argued that the field of archaeology has made it so that it's more lucrative for these local workers to perform as if they're not knowledgeable about archaeology.

“The workers told me stories where archaeologists would fire them or demote them or hire their brother instead, if they tried to speak up during an archeological excavation,” Mickel says. “So, my argument is that archaeologists have effectively created economic systems in the places they work where it’s financially beneficial for the local workers to actually downplay their expertise.”

A pool of experts

As Mickel was finishing her work on Why Those Who Shovel Are Silent, two Jordanian nonprofit corporations — Sela and Hand by Hand — were created with a goal of reimagining the way archaeology is economically conducted there. Both companies were founded by two small groups of former site workers from the communities from the major heritage sites of Petra and Umm el-Jimal and have been working in ways that prioritize workers’ rights, center the intellectual contributions of those workers, and give them some sort of decision-making capacity over the research process.

By training and certifying local workers as experts, they aim to create a pool of documented expert archaeological workers who might be employed on future archaeological projects in Jordan. They are also working with the Jordanian government to create a legal framework so that archaeologists will be required to hire such certified workers — and to pay for their expertise.

For Turning Over the Spade, Mickel has been following these two companies to see if they have been successful in changing the conditions for workers on the ground, and if so, how that does change the science. The NEH fellowship has allowed her to complete her research project with the level of sustained, embedded fieldwork necessary for her research, and then complete the manuscript of her next book.

Mickel loves archaeology because it combines two of her passions: science and storytelling. She loved science so much that she had entered The College of William and Mary as a freshman with the idea of majoring in astrophysics.

“I really like data, and I really like science,” she says. “But I also really like being creative and artistic. So I thought I would blend those by doing astrophysics and theater.”

However, when she took her first archeology class, she found that it, too, blended her love of science and creativity.

“We use scientific methods to test things, and you have to be very data literate to be an archaeologist,” she says. “But it’s also about putting together fragments of the past and storytelling. I went on my first excavation to Kenya when I was 18 and I've just been going ever since.”

Mickel was drawn to the community archaeology movement because she has also long been motivated by the ideals of social justice and equity, an ethos that was bolstered by her coursework in anthropology.

“Traditional archaeological excavation can absolutely serve those ends,” Mickel said, “but there are a lot of examples, especially in the Middle East, of archaeology instead serving the colonial enterprise and the imperialist conquest of the region.”

It was also during her undergraduate experience that she was influenced by British archaeologist Ian Hodder, who would eventually become her doctoral advisor at Stanford University, who was a pioneer of postprocessualist theory in archaeology, a movement that emphasizes the subjectivity of archaeological interpretations.

“He talked a lot about our position in the present when we're learning about the past, and the responsibilities to people that we have in the present,” Mickel said, “and it just really resonated with me.”

The future of archaeology

Mickel believes that the field of archaeology will be changing significantly over the next few decades, especially with the growth of community archaeology. For her, that not only means a more ethical science, but also a better science, because the people who live in the places where they work often know a lot about the history of those places.

“My argument is that the local people who have worked in archaeology for decades probably have some expertise about the site and about archaeology that we should be actively trying to listen to,” Mickel says.

Mickel notes that the work of the two Jordanian corporations she’s followed for her research, if successful, will overturn entrenched archaeological labor management strategies with more than 200 years of history.

“We did it one way for a really long time that excluded a lot of the people whose voices and perspectives should be centered in deciding how the past gets studied, and now we have an opportunity to do it better.”