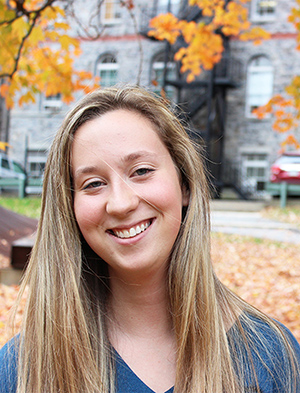 Pastorin's work involved meeting with government officials, staff at a children’s hospital and officials from Caring for Cambodia. At the end of her trip, Pastorini discussed her work with Sotheara Chhim, TPO’s executive director and a renowned Khmer mental health researcher, who coined the term baksbat.

“Baksbat is not something that’s commonly talked about because most everyone suffers it,” she says. “Everyone has a story, so they don’t really look to care for people’s repercussions because everyone suffered the repercussions. It’s such a different collectivist perspective than America, which is so individualist. It was interesting to see that difference. Many people had never heard of baksbat as a mental illness, so there was this discrepancy between what I was expecting to hear and what I actually heard.”
Aspiring to be a psychiatrist, Pastorini hopes to attend medical school after graduating from Lehigh. She says she also envisions possibly returning to work for an NGO in Cambodia.
"The Cambodian government allocates 0.02 percent of its health budget to mental health. There isn’t easy access for people suffering from mental illness. There is also a lack of psychiatric education and the overall idea of mental health illness is still new. A large population of Cambodians don’t yet know how to recognize it. They do not know there are resources for them, if there are any. The government isn’t putting them in a place to easily access that help.”
Pastorini hopes to fill that gap.