Julia Klees ’82 thought she might be headed for a career in medicine early on. What was less foreseeable was the shape that career would take and the breadth of expertise it would require. 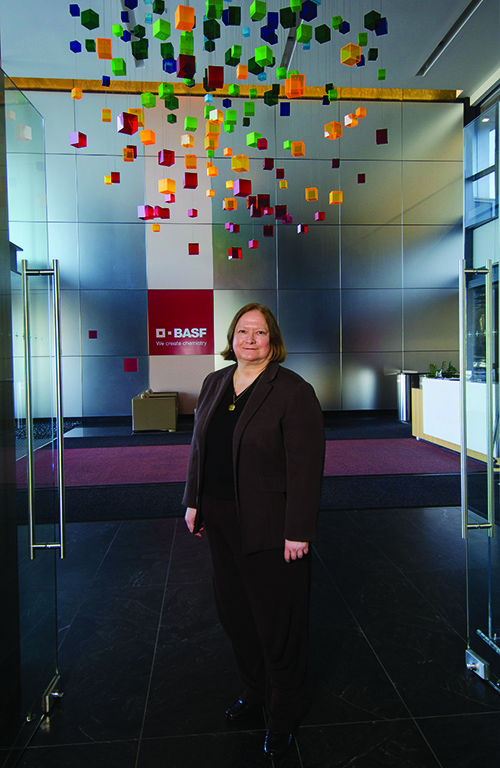 “There were a lot of things I was interested in growing up, but my father was a physician and I had gone to the hospital a lot with him,” she says. “I liked the biological sciences and chemistry particularly, so I did the prerequisites and enrolled in the Lehigh-Hahnemann program, a seven-year B.A./M.D. degree program, which was a good option for somebody like me, and if I decided I didn’t want to do it, I could leave the program.”

She didn’t leave, and Klees is now the associate medical director for BASF Corporation. Her post falls under the broad rubric of occupational medicine, but those unfamiliar with the field may not recognize its scope and complexity. Klees oversees the health of a village-sized population of 16,000 employees spread across the country while they are on the job at BASF. Her day-to-day responsibilities include everything from designing systems for monitoring health effects of potential chemical exposures at plants to implementing the company-wide flu vaccine program—and everything in between.

“I ended up in medicine, but for folks who are interested in health, medicine is not the only possibility. There are other disciplines in public health—like toxicology, epidemiology and health education—which are really important tools that I use every day.”

“Medicine is a real art. That is why it appealed to me. For instance, there is an art to taking a history and conversing with patients and talking to people of all sorts—and not just patients, but your colleagues and coworkers. There’s a bit of the Socratic Method in there, too, in terms of obtaining an answer and then following up on that answer with the appropriate question that digs a little deeper. That’s the key to taking a good medical history.”

Part of Klees’ interest in public health was inspired by the career of Alice Hamilton, whom she learned of in a public health course with the late John Ellis, who taught in the department of history at Lehigh. Hamilton was a groundbreaking physician who did seminal work in the fields of toxicology and occupational health. She became the first woman ever appointed to the Harvard University faculty, in 1919.

“In her study of workers suffering from diseases like lead poisoning, she sifted tirelessly through hospital records, climbed treacherous catwalks and slipped covertly into factories around the country,” according to the T.H. Chan School of Public Health at Harvard.

“Hamilton was one of the people instrumental in passing the first workers compensation laws in the United States,” Klees said. “In the day when physicians were trained in an apprenticeship system, she actually traveled to Germany to study pathology.”

While Klees’ preparation for her career was broad and rigorous, none of it turned out to be surplus to requirements.

“At Lehigh, having taken the harder road in terms of engineering, physics and chemistry, and so forth, it gave me a wonderful toolkit for working at a chemical company,” she said.

After receiving her medical degree from Drexel (Hahnemann) in 1984, Klees continued her professional training, doing a residency in internal medicine at the Mayo Graduate School of Medicine in Minnesota, followed by a residency in occupational medicine at the University of California, San Francisco. Klees then earned a master’s degree in public health with a focus in environmental health sciences at the University of California, Berkeley. All the clinical, policy and organizational training has proved valuable.

“I ended up in medicine, but for folks who are interested in health, medicine is not the only possibility. There are other disciplines in public health—like toxicology, epidemiology and health education—which are really important tools that I use every day.”

After completing her studies and residencies, Klees went to work as an attending physician and medical director of the Occupational Health Service at the Albert Einstein Medical Center in Philadelphia. After two years, she returned to academic medicine as an assistant professor in the Division of the Environmental Medicine and Toxicology in the department of medicine at Jefferson Medical College, while maintaining a private practice in occupational medicine. Klees has continued her teaching to this day and currently holds an appointment at the Mount Sinai School of Medicine.

When Klees was offered the position at BASF, she seized the chance to put her full training to work on a larger scale.

“If you’re a private clinician, you are working with smaller populations and just seeing lots of exams,” she said. “In the land of academics, you are limited unless you can develop some of the other pieces to the practice, which is hard to do because you have to have access to a population to practice population health, which is what preventive medicine and public health are. It’s tough to do that in academic medicine; it really is. So that’s the big difference, and what I am doing now, in essence, is implementing a public health system for a sizable population, but within a corporation.”

A principal duty of an occupational health professional is touring work facilities. At a manufacturing plant, Klees looks for potential points of exposure to a dangerous chemical that may put employees at risk.

“Exposure to heat, to noise and, frankly, to other people, because in the workplace, you’re very dependent on other people. They can do something suddenly that results in an injury.”

“I am looking for health effects and trying to find them early, before we have real disease; that is medical surveillance,” Klees said.

Then comes the logistical challenge.

“How do you manage that and put the systems in place to organize the information to track employees over time? Add to that (that) BASF has120 sites nationwide. How do you organize the whole thing so that you can review the information and also meet all the regulatory and ethical requirements? That’s where it gets fun. And just when you think you’d seen it all, something new crops up.”