Fulbright student Rohullah Naderi is committed to changing the political landscape in Afghanistan. A master’s degree student in Lehigh University’s political science department, Naderi hopes to return to his native country after graduation and run for parliament. 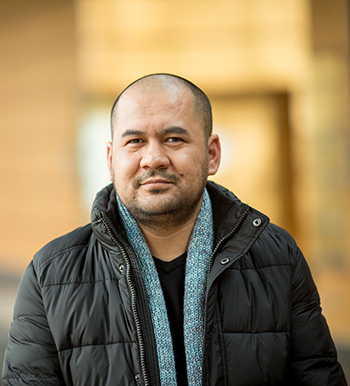 “I am passionate about political science and this passion was inculcated in me by my father who himself is a politician, although he has retired from active politics a couple of years ago,” explains Naderi. “My father has been involved in the political affairs of the country since 1979. I have followed his political activities for quite some time and it has been very fascinating to me. This motivated me to study political science academically in order to hone my political knowledge and skills.
“I have a strong leaning to continue with the political legacy of my father. It is a huge challenge to fill his big shoes as he devoted almost his entire life first to the liberation of Afghanistan in the 1980s from Soviet invasion and then to its reconstruction in the post-Taliban era.
“The political knowledge and skills that I gain at Lehigh would hopefully help me to succeed as a politician and bring about positive change in the political atmosphere of Afghanistan,” he says.
Naderi clearly understands the challenges he will face, both in mounting a successful election campaign and in effecting change in his country’s fledgling post-Taliban democracy. He expects to finish his studies in summer 2017 and plans to be a candidate in parliamentary elections that would tentatively take place in mid-2017.
“Gathering a committed campaign team, raising funds, managing the campaign, communicating with the voters about election issues and finally mobilizing them to elect me would be complex challenges,” he says. “I hope the academic exposure to political science at Lehigh and observing American election campaigns would stand me out to replicate it in Afghanistan.”
Naderi plans to run for parliament to represent the province of Diakundi, which he describes as a relatively remote and neglected region located in central Afghanistan, with a predominantly Hazara population. The idea of running for parliament occurred to Naderi during a trip there in   2004.
“Spending some time in that part of the country, and particularly in the province of Diakundi, was upsetting and frustrating. There hasn’t been any development in the region following the overthrow of the Taliban in 2001. Although the number of children going to school has increased, the quality of education at schools has left a lot to be desired. The health care system is poor and people from other districts and localities have to travel far and wide to access medical care in Kabul, the capital of the province.
“Those who are in critical condition cannot even make it to Kabul due to poor transport infrastructure. The distance between Kabul and Diakundi is not very long, and construction of two tunnels will do the job and can save valuable lives. Influencing public policies and programs in favor of addressing these issues will form my immediate priorities and have formed the basis of my candidacy for parliament,” he explains.
Originally from the Uruzgan province in central Afghanistan, Naderi and his family have lived in Kabul since returning to the country in 2004. Prior to that, they were refugees living in Pakistan. Naderi received his undergraduate degree from Bangalore University in India, through a scholarship funded by the Indian government. His graduate studies at Lehigh are funded through a Fulbright Scholarship.
“From very early on, I had the dream of studying in the United States,” Naderi says. “Its top-class universities, its superb professors and its enriching intellectual environment have always captivated me. The fact that before coming to the United States I went to India to study journalism and communication was to prepare myself for U.S universities.
“In the Fulbright application, you have the luxury to choose your schools. However, the Fulbright committee does not guarantee that you will be admitted to one of them as different schools have different criteria of admission. Your choice of school mostly depends on your TOEFL and GRE scores. The higher these scores, the higher the chances of getting into top schools such as Lehigh University.”
At Lehigh, Naderi focuses on American politics. “Since the United States is the largest economy in the world with the most sophisticated military capability, studying its political structure and decision-making process is quite attractive. The fact that it has a tremendous amount of political influence on the global stage makes it an even more intriguing area of study,” he says.
Naderi has five brothers and sisters and he is not the only one of his siblings hoping to make an impact on the future of Afghanistan. “Apart from attending classes, I am working for my elder sister’s non-governmental organization (NGO) based in Kabul, to get funds, grants and projects to improve the plight of Afghan women by focusing on their literacy. I have been meeting various people and groups who are active in the domain of women empowerment and development.
“I am also working on a project of establishing a foundation in the United States for the purpose of providing scholarships to the minority groups in Afghanistan. This project is in a nascent stage,” he adds.
In the end, Naderi is counting on his Lehigh education to do far more than just help him get elected to parliament.
“The second agenda that I hope to accomplish is highlighting and fighting the endemic to corruption, a menace that has taken a serious toll on the development of Afghanistan,” he explains. “Since its inception, Afghan parliament has been accused of pervasive corruption and incompetence--perhaps because of the presence of academically and professionally unqualified members at the heart of decision-making bodies within the parliament. This incompetence and under-delivery has cost Afghanistan in loss of resources and opportunities.
“By getting a graduate education of international excellence in the field of politics from a U.S. university, I can make an exemplary contribution to filling the gap of incompetence and unprofessionalism in the Afghan parliament,” he says. “I would like to believe that reforming Afghan parliament is in fact reforming Afghan politics.”
- Jennifer Marangos

Philosophy Faculty Receive Grants from National Endowment for the Humanities