The exploration of Mars and the search for evidence of past water on the red planet will  be addressed when Steven W. Squyres, the James A. Weeks Professor of Physical Sciences at Cornell University and the Principal Investigator for the science payload on the Mars Exploration Rover Project, delivers the 2018 Feigl Lecture on Thursday, March 29 at 4:10 pm in 270 Lewis Lab. The lecture -- Roving Mars: Spirit, Opportunity and the Exploration of the Red Planet -- is free and open to the public. 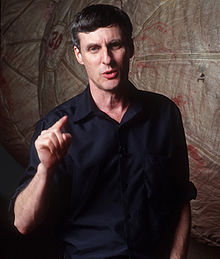 In January of 2004, twin robotic explorers named Spirit and Opportunity landed on Mars. Expected to last for 90 days, their mission has now gone on for more than fourteen years. Its objective is to search for evidence of past water on Mars, and to determine if Mars ever had conditions that would have been suitable for life.
Spirit landed in Gusev Crater, a large impact crater in the southern highlands of Mars. Finding only ancient lava on the crater floor, Spirit drove 2.5 km to the base of the Columbia Hills, a mountain range near the landing site. There Spirit ascended Husband Hill, the highest summit in the range, finding evidence that the rocks were modified long ago by water. Later, Spirit found strong evidence for ancient hot springs on Mars. Spirit’s mission ended after six years on the martian surface. Opportunity landed on Meridiani Planum, a smooth plateau near the martian equator. In the first few weeks after landing, Opportunity found compelling evidence for long-ago water on Mars. This evidence included thick deposits of sulfate salts, concretions that precipitated from liquid water, and rocks that preserve ancient ripples formed when water flowed over sand. Opportunity has driven more than 40 kilometers across the martiansurface, and has been exploring Endeavour Crater, a spectacular impact crater 25 kilometers in diameter.
To develop Spirit and Opportunity, a team of more than 4,000 highly motivated engineers and scientists overcame a host of technical challenges. The challenges were multiplied by an extraordinarily tight schedule that was driven by the motions of the planets. The talk will provide an up-to-date summary of the missions of Spirit and Opportunity, from their initial conception through their development, launch, landing, and operations on the surface of Mars.
Steven Squyres received his Ph.D. from Cornell in 1981, and after five years at NASA’s Ames Research Center became a faculty member at Cornell in 1986. He has participated in many planetary exploration missions, including Voyager, Magellan, NEAR, Cassini, Mars Express, MRO, Mars Odyssey, and the Mars Science Laboratory. Dr. Squyresled the most recent National Research Council Planetary Decadal Survey, and until recently served as Chairman of the NASA Advisory Council. He is a fellow of the American Academy of Arts and Sciences.
The Feigl Lecture was established by Lehigh’s department of physics in memory of Frank J. Feigl, who served 21 years on the department’s faculty until his death in 1988. A well-read advocate of liberal education, Feigl was renowned for his research into the impurities and defects in semiconducting materials and insulators, and was elected a Fellow of the American Physical Society.
The lecture is sponsored by the Department of Physics and the Society of Physics Students.
A printable flyer is available for download here.